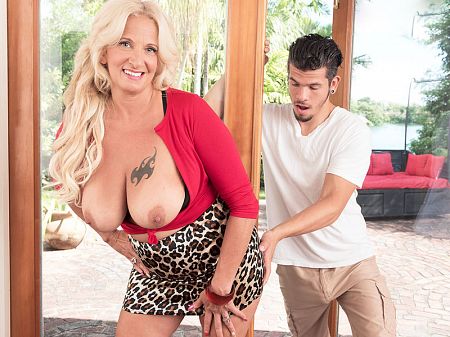 Brooklynn Rayne, a 50-year-old wife and mother of four, is lounging outside on a sunny day in South Florida. We're treated to upskirt views of her panties and downblouse views of her big tits, which are encased in a tight bra.

Why is she there, spreading her legs and looking so sexy? She's trying to lure young cock, and it just so happens that 28-year-old Bambino is spying on her through binoculars from a nearby pier.

"He definitely wants to play," she says.

Bambino is embarrassed about getting caught and hesitates when Brooklynn calls him over.

And there's a pussy down there.

Charlie Charm, a 63-year-old mother and grandmother, returns to suck and fuck 30something stud...

"A man attracts my attention by laughing at my jokes!" said Jamie Foster, a...

Natalie Moon, a 46-year-old first-timer from Maryland, who lives in Nevada, said she was...

Ainsley Adams, high school teacher, is sitting at her desk when she hears a...

Honestly, we have no idea what's going on at the start of this scene...