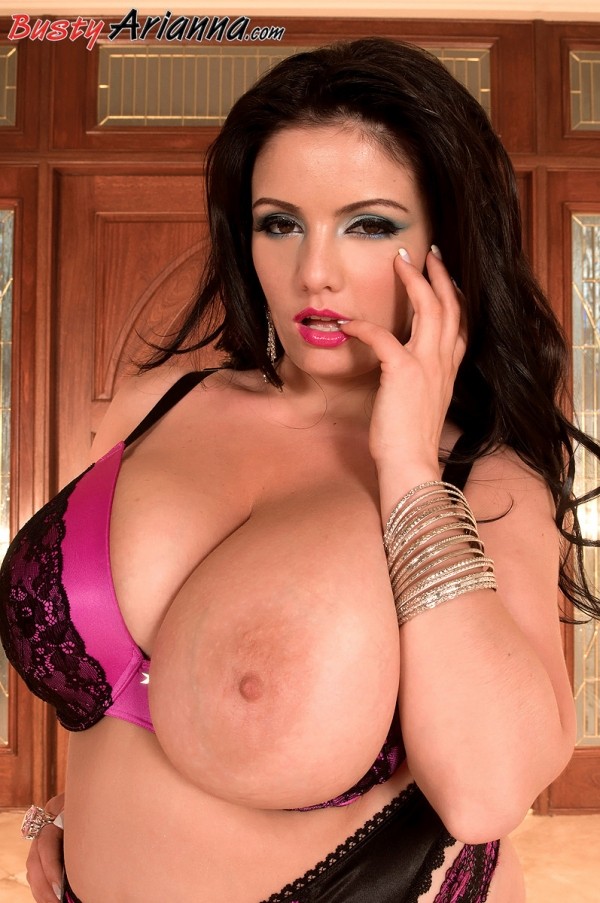 Arianna puts every Victoria's Secret model to shame in this pictorial, shot on Grand Bahama Island during the shooting of On Location Grand Bahama (which also features Karla James, Taylor Steele, Jenna Valentine and Natalie Fiore). Notice how well her bra fits. That's an unusual occurrence for Arianna.

"It's very difficult for me to find bras that fit," she said. " My boobs are so big, and they seem to get bigger and bigger every year. I usually buy bras when I go on vacation in other countries, but when I am home in Romania, it is very difficult."

Arianna looks sexy but elegant in her vintage stockings, garter belt, lace panties and heels. Her breasts are impressive, as always, but not in-your-face, as they often are...until later in the photo set, when her bra comes off. Photo #24, in which she hefts a heavy hooter to her mouth for a lick, is highly jackable. She looks built-like-a-brick-shithouse in #25. And she demonstrates just how tight her pussy is in #62.

"I was using my pussy to squeeze tightly on the toy," Arianna said. "It felt so good!"

"I love to be watched," wife and mother of three Kenzi Foxx said. "I...

Charli Adams, a 56-year-old wife, mom and event planner from Connecticut shows off her...

Hitomi puts her purple fetish-lingerie and steps out onto the terrace overlooking the Caribbean...

Lucky Starr, a 45-year-old cougar who was born in New York City and now...