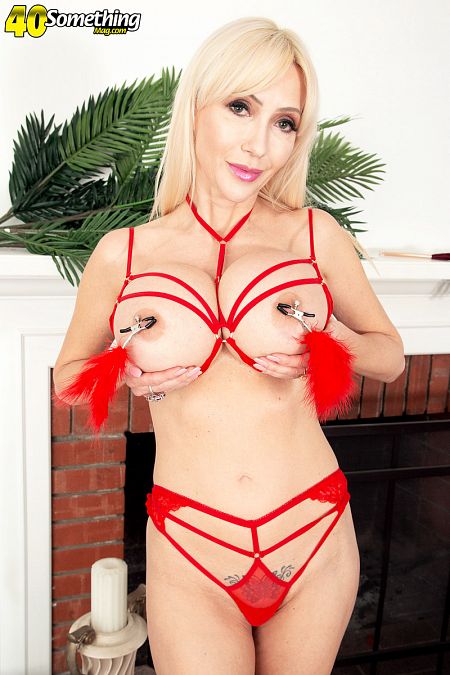 We've known since she debuted in March 2019 that Victoria Lobov is a very sensual woman. But in this scene--a solo scene, at that--Victoria's sensuality and sexuality are in hyper-mode as she uses a variety of toys on her big tits, pussy and asshole and uses nipple clamps on her rock-hard nips. This 47-year-old, big-titted Russian wife is really something special. She oozes sex appeal in her sky-high fuck-me pumps. Man, is her husband the luckiest man on earth. Of course, we're very lucky, too, to have her.

40Something: Where is the craziest place you've ever had sex?

Victoria: In the lavatory of an airplane. It was a commercial flight. We were going to Europe. It was a long flight. I was with my husband, and it was getting boring, so you drink, then you drink a little more and you touch each other and get all excited. And you have a lot of time, so he needed to go to the bathroom because he couldn't sit there with a bulge in his pants, and then I thought, "Why not follow him?" So I just did that. I knocked. Nobody saw me, and there were two of us inside, and it was tight.

40Something: Did the flight attendants see you go in there?

Victoria: No. It was a long flight. Nobody saw us. Well, maybe somebody saw, but nobody interrupted us.

40Something: Was this all-the-way sex?

Victoria: It was sex! All the way!

40Something: What were you wearing?

Victoria: I was wearing a dress. A mini-dress. It was easy access! We just stood there and we did it.

40Something: Was it fun?

Victoria: It was the most-fun I've ever had. It was forbidden. It was something you're not supposed to do. It was just exciting. Afterwards, I thought, "We could've been caught," but it was worth it.

40Something: Did the possibility that you might have been caught make it more exciting?

Today, we get to spend the day at the pool with Mia Magnusson, a...

Renee Kane, 60, is cleaning up around the house and can't believe the mess...

The props to Merilyn continue to roll in. After the January '06 SCORE hit...

The scene you're about to see--photos of Rita Daniels' first ever air-tight fuckathon--started with...