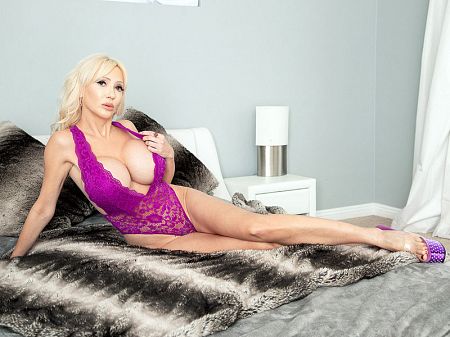 Busty, blonde 47-year-old Victoria Lubov is relaxing in bed. Her tits are popping out of her sexy lingerie, and she's watching something on her smartphone. But what? Whatever it is, it's turning her on. She moans as she rubs her big breasts. The more she watches, the more she gets turned on.

But wait a second: Are we just going to sit here and watch Victoria watch something on her smartphone?

And that's it, right? This is a very hot DP toy scene with one of the hottest, bustiest MILFs around, right?

Wrong! Because minutes later, Victoria's husband walks in on her.

"Woah, honey, what are you doing?" Mr. Lobov asks.

Victoria's hubby moves in for a closer look.

Mr. Lobov excuses himself for a second to make a call, which is an odd thing to do when your wife is lying in bed with two toys crammed up her holes.

But he's not just calling work. He's calling his buddy.

"My wife needs help with something," he says. "Just come. The door will be open."

When Mr. Lobov's buddy shows up and walks upstairs, what does he see? Mrs. Lobov sucking his buddy's cock. And what does Victoria's hubby do? He asks him to join in!

Today, big-titted, 50-year-old blonde Dani Dare talks dirty to get you off. And if...

In this video interview, 45-year-old Asian cougar Lucky Starr tells and shows us the...

No sooner is Jadan Snow's husband out the door than she picks up her...

Amber Lynn Bach, one of our favorite Florida MILFs, is out for some fuckin'...

Milan is lying in bed, minding his own business while Alby Daor does some...