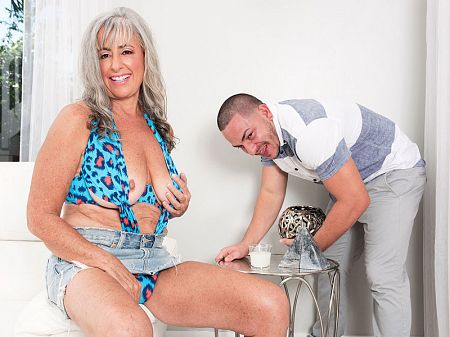 Silver-haired Silva Foxx, who's 62 years old, had her wildest sexual experience (outside of 60PlusMILFs.com, of course) on a motorcycle.

"I was driving my Kawasaki 500 with a short skirt and no panties," she said, "and he was doing me from behind."

Silva is into women. She's had sex with Leah and a lot of other gals. But here, her focus is on the cock. She knows what she's doing.

Mallory Taylor, a 40-year-old divorcee and mom, convinces her man to have sex with...

Last seen sharing cock with Luna Azul and eating pussy and having her pussy...

The last time we saw newcomer Missy Masters, a 48-year-old divorcee and mother from...

Minka, 59 years old and still the world's bustiest Asian, is back to suck...

What exactly makes a cock a monster cock? Well, the size, for one. But...

So a guy (we'll call him Matt) goes to the doctor (will call her...