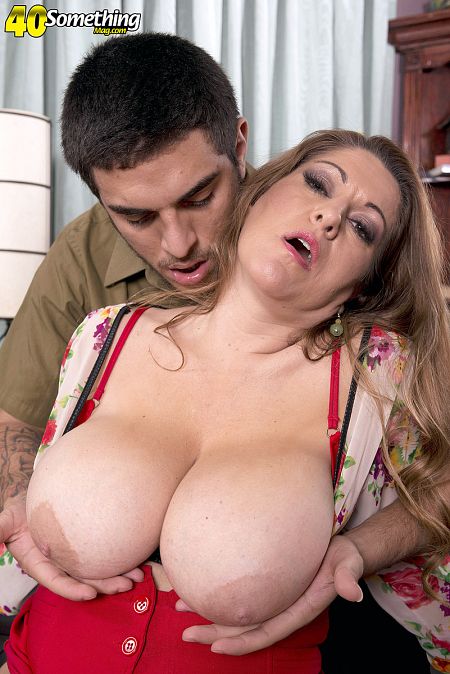 James, Janessa’s 21-year-old stud in this scene, absolutely does not need to be told what to do with Janessa’s G-cup naturals. He sucks them. He fucks them. He buries his face in them. The only thing he doesn’t do is shoot his load all over them after he fucks her mouth and pussy, which is surprising.

Janessa found us after a professional photographer suggested she call our studio. That’s a rare occurrence, but when we saw her photos, it didn’t take long to arrange her trip.

“I love my body now,” Janessa said. “I have to thank every Latin singer who has come out in these past few years. My body type wasn’t considered to be special a while back. These bombshell bodies, you know? It took from about the late-’90s to now where these bombshell bodies are considered sexy. I have to thank people like Jennifer Lopez and Sofia Vergara for that. Now every girl is trying to get a butt and big tits. The Kardashians, too. Women aren’t trying to look like they’re dying or don’t eat.”

Amazingly, Janessa was not the bustiest girl in her high school. What a school that must have been! She’s a big sports fan who loves football, basketball, baseball and boxing. She told us, “I’m a loyal friend, a great cook and I have an amazing memory.”

Vanessa, a 51-year-old hottie from Argentina, was a big deal on 40SomethingMag.com back in...

It's exercise day for Jynn, a 51-year-old wife and mom (and former gymnastics coach)....

"I am a go-getter," said Kokie del Coco, a 60-year-old divorcee, mother and grandmother...

Johnny, who's 23 years old, walks into his girlfriend's house and hears moaning. He's...

"Today, I have a surprise for you. You're going to see Billi Bardot's sweater...