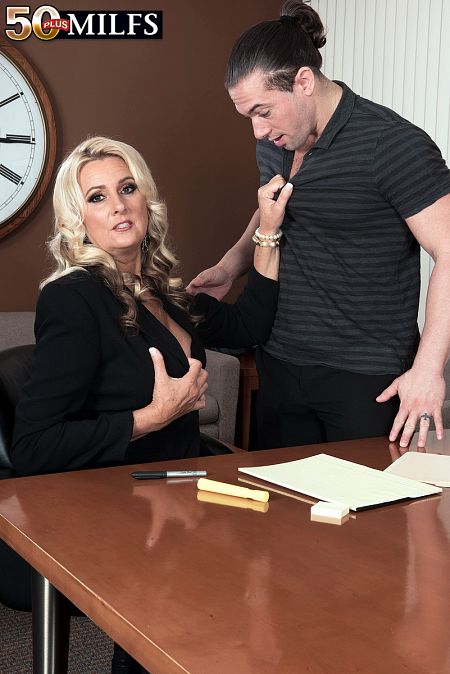 Tarzan is the employee. Dallas Matthews, who's 57 years old, is his boss. He has the reports she requested, but she's sitting there with her tits pouring out of her business suit. What's a man to do? Fuck the boss? That's right! Give the boss what she wants, which in this case is Tarzan's cock in her mouth and pussy.

Now that's one way to get a promotion. A very good way.

"Men are so simple," Dallas said, laughing. "They attract me in a lot of ways. Number one, there are the pheromones that work in their favor or some sexy smell that they have. It's total chemistry. Either I'm attracted or I'm not. But it's nice for them to have a sense of humor with brains behind it. And not necessarily a good body but looking good in their clothes."

And out of them, too. Or at least having a hard-on. That'll do, too.

Dallas works in finance and describes herself as a down-to-earth person.

And for Dallas. And especially for us.

When this scene opens, 40-year-old Tsunami Foxxx is sitting on a couch. "I...

In her return to 40SomethingMag.com, 49-year-old wife, mother and grandmother Jessie Reines takes a...

When Cashmere did her first-ever fuck scenes for 50PlusMILFs.com about a year and a...

There's a lot to love here. First, there's Karina's hair, which has been styled...

Cody Lovett, a 45-year-old first-timer from Michigan, was a little nervous before her first...