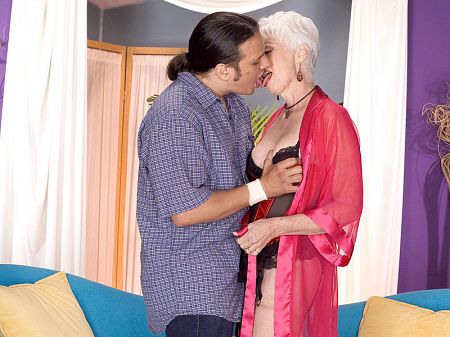 "Fucking is great, but being watched while I'm fucking makes it better," sexy, 58-year-old, white-haired Suzy said. "The fact that my husband was sitting 10 feet away and watching while this scene was being shot makes it even better."

This scene has never appeared on 50PlusMILFs.com. Nor has Suzy. She's a hairstylist and housewife from Florida who, when we asked her what kinds of guys she likes, said, "Nine inches or better is real nice!" She didn't mean their height, of course. She meant the size of their cocks.

Suzy just isn't like most 58-year-olds. She's a swinger who loves to watch and loves when people watch her. She's never had a problem seducing men her age and older but wanted to see how she'd do with a younger stud, which led her to us. The guy is 28.

Suzy's wildest sexual encounter: "In an elevator on the ninth floor with the door held open so it couldn't move. That was wild. We did get caught, by the way."

Suzy said a man can get her attention by "telling me how sexy I am and rubbing against me. That tells me he's really interested in me, especially if he's hard!"

See More of Suzy at 50PLUSMILFS.COM!

Brenda Douglas, the 67-year-old divorcee from Oregon who made a lot of new friends...

In one of the hottest scenes ever, 45-year-old mom and former big-boob superstar Betty...

Back in 2011 when Sindi Star debuted at 40SomethingMag.com, we did a video called...

"I like to go to the movies, dinner or hiking in short skirts with...

When the time came for super-GILF Sally D'Angelo's annual visit to 60PlusMILFs.com, we asked,...

To some women, a lube job means getting your car's oil changed every 3,000...

There are a lot of reasons we love 63-year-old Katia. She's beautiful. She's sexy....