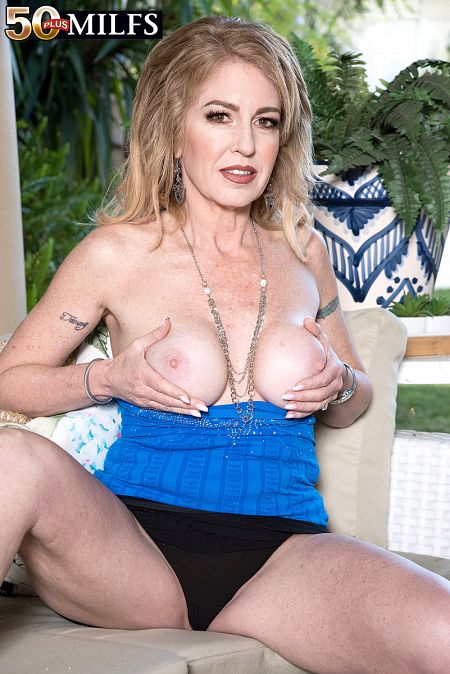 "I'm so happy that I got my pussy pierced," said Sindi Star, a 50-year-old divorcee and mom. "Sometimes it rubs against my clit, and I'll just be walking down the street or shopping in a store and I'll have an orgasm."

Here, Sindi rubs her pussy to get that orgasm, but the piercing certainly doesn't hurt matters.

Sindi used to be a swinger but isn't anymore. She told us, "I enjoy being nude around the house and in the sun. When I'm home, I'm usually naked and playing with my pussy."

Sindi enjoys jogging, swimming, nature and hanging out with her friends. She says a man can get her attention "by being elegant and manly." She says the people who know her "are used to me being wild." Her sexual fantasy: "three guys stuffing me in all three holes." She means her pussy, asshole and mouth, we assume.

Milan is sleeping. Juliett Russo, a 54-year-old divorcee and mother of two daughters, is...

When 43-year-old Coralyn Jewel's husband leaves for work, she calls her best friend and...

"The people I know aren't surprised by anything I do," said Lucky Starr, a...

Silva Foxx, a 62-year-old divorcee, told us how she ended up in our studio,...

"My husband just left," 43-year-old Ciara Ryder says at the start of this scene....

Now for a lady whose appearance here is long overdue: Minka, the world's bustiest...