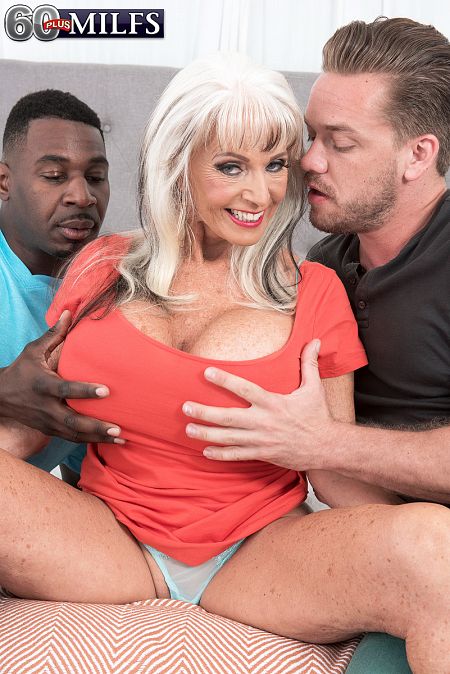 When the time came for super-GILF Sally D’Angelo‘s annual visit to 60PlusMILFs.com, we asked, “What can Sally do that she hasn’t done for us so far?” And Sally supplied the answer.

Hey, whatever Sally wants, Sally gets, and here, Sally sucks and fucks two big cocks, then she gets her pussy and ass stuffed at the same time in a variety of positions. This woman does DP right, and the guys (Jax is 28, Kyle is 30) are young enough to be her sons.

We asked Sally if she ever gets recognized as the star she is when she’s out and about, and she said, “Yes, all the time. Airports, the mall, the gym, post office, neighbors, Wal-Mart and, most recently, I just moved and the landscaper recognized me.”

He’d probably jacked off to her a hundred times or two.

We also asked her if she’s ever had sex with a fan, and she said, “As a matter of fact, I did. A guy at a restaurant recognized me. We chit-chatted and he was cute, so I said, ‘Okay,’ and holy fuck, did he have a huge cock, biggest one I’ve ever seen on a white guy.”

Basically, the things that Sally does with us, she does in her personal life, too. Including getting DP’d. Thanks for sharing, Sally.

Robin Pachino, 50, drives her car into the auto repair shop and checks out...

"I love to dance. I love to perform," said 64-year-old divorcee, mother and grandmother...

Alex, who's 34 years old, goes to Wendy Leigh's bordello looking for some 18-year-old...

Lucky Starr, a 45-year-old cougar who was born in New York City and now...

Here's one of the sexiest, most-beautiful MILFs ever. Her name is Persia Monir, she...