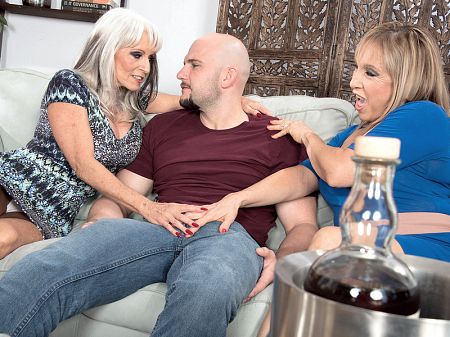 Sally told us that she has watched her scenes with her husband.

"They were hot and we fucked," Sally said.

Luna has not watched her scenes, but she says they made her "more aware of my sexuality."

Luna's sexuality is something we've always been aware of.

Luna's top three sexual encounters were "in the back of a van, with a hot Italian and his brother and in an airplane bathroom."

We're guessing that this scene is going to crack the top three.

When we first met 47-year-old wife Victoria Lobov, she told us, "I'm not into...

When Rose Marie, a 49-year-old mom from Arizona, shot this scene, she told us,...

When these photos were shot, Luna Azul was 57 years old. It was her...

In a scene that can only be described as epic, 65-year-old Rita Daniels and...

"Holy shit! I can't believe how hot my new neighbor is," Tony says when...

This scene of 40-year-old Brianna Wildman sucking and fucking JMac is a favorite of...

Brooklynn Rayne, a 50-year-old wife and mother of four from South Florida, has big...