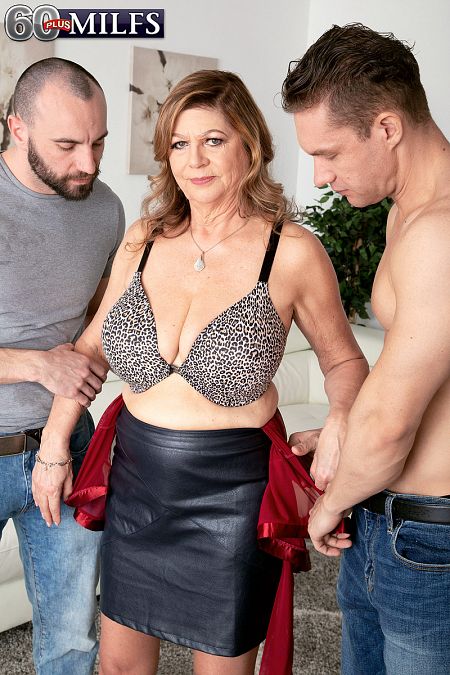 Today, in only her second fuck scene ever, this 67-year-old divorcee from Oregon is going to get her ass fucked by two hung studs and then they're going to DP her. Get ready for the icing, Brenda!

Brenda, wearing a sexy top, a short, tight skirt and heels, has her eyes on the guys working on her house.

"They're so young and fit and handsome," she thinks. "I wonder if they've ever been with an older woman? It would be fun for me!

"Oh, Brenda, you can't fuck your construction workers. Or can you?" she says.

Yes, you can, Brenda.

Brenda's seduction takes no time at all. Hey, when you have a body like Brenda's, all it takes is a little suggestion. Before long, she's sucking their cocks, then the guys--both of whom are almost young enough to be her grandsons--are taking turns on her pussy. But what Brenda really wants is their young cocks in her tight, old ass, and she gets what she wants plus a DP.

How many 60PlusMILFs have gotten DP'd in their second scene? None. The previous record was three scenes, held by Jeannie Lou, Caroline Hamsel and Seka Black. Congratulations, Brenda!

Brenda is not a swinger, however, "I have played sexually with many people at one time. I have entertained five guys at once in my home many times and they all left satisfied and with a huge smile."

"I like being watched while having sex. I often leave the drapes open in my bedroom and then fantasize that someone may be watching, enjoying and releasing."

Now the whole world is watching her.

This pictorial is on the list of most Dusty fans' all-time favorite photo shoots....

In this lovely scene, lovely and sexy mom and granny Cammille Austin sucks and...

Virginia Simms was discovered by one of our correspondents in Prague. She was a...

Before there was Busty Dusty, there was Rocky Raquel, still extremely busty by mainstream...

When we asked 61-year-old Robin Pachino, "What's the best way for a guy to...