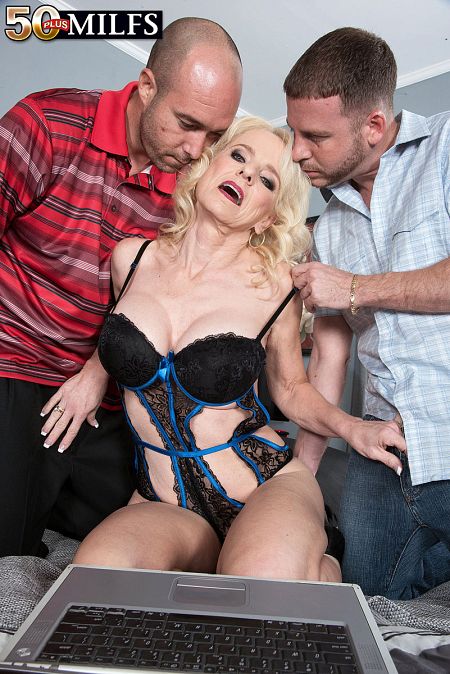 A three-way for Cammille Austin in which she gets ass-fucked by both guys? We have to admit, that's not unusual. This is a woman who had a gang bang with eight big, black cocks on her wedding night while her husband watched. Of course, they all took turns on her ass. And when the guys were done, her hubby, who had been filming the action, got some sloppy seconds. Or sloppy ninths.

We asked Cammille if she likes it rough or gentle, and she said, "It varies. It depends on my mood. Sometimes I really like it slow and sensual to where I can really connect with the person. Other times, I like it fast, hard and rough. I love having my ass slapped and my nipples pinched. I don't want it too hard where you leave marks, but I love having my ass slapped. I'm finding out that I'm up for anything!"

Cammille lives in Arkansas, a relatively conservative part of the United States.

"I work in health care," she said. "My husband is a surgeon, so mainly I'm seen in scrubs. We once had sex in the surgeons' locker room. We could've gotten caught and that made it very exciting, but it was nothing compared to this."

"I am a go-getter," said Kokie del Coco, a 60-year-old divorcee, mother and grandmother...

It seems like only yesterday that Brandy Talore was in the SCORE Studio for...

"This is a little toy that my husband bought for me," 60-year-old wife, mother...

Andi James, a 52-year-old divorcee and mom, received a lot of acclaim when she...