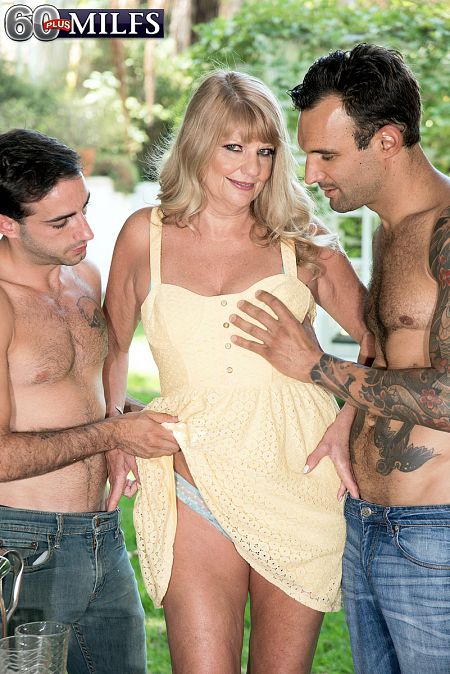 In her return to 60PlusMILFs.com, 61-year-old Mia Magnusson sucks and fucks two guys whose combined age is just a year older than hers. That's hot! At least Mia thinks it is. Actually, judging by the way the two guys glaze her beautiful face at the end of this scene, they think it's hot, too.

Mia is divorced. She's a mother and a grandmother. She's also one of the stars of the movie Granny Fuck Club. In that flick, she has a three-way with Luna Azul and a young guy and also has her pussy eaten by the co-members of the club.

"I love sex, and sex is just a part of life that I embrace," Mia said. "Like dancing, it can put you into that next level of bliss. When you're younger, you're a lot more inhibited and shy, and, at least for women, you attach a great romantic expectation out of sex, so you're always riding that high and low of broken hearts, and when you get older, you can enjoy it for what it is. Freer and more fun."

What Mia is saying is that she has no intention of dating or marrying either of the two studs in this scene. They've got what she wants. She has what they want.

"I thought [having sex on-camera] would be a big jump and so nerve-wracking and scary, and it really isn't," Mia said. "I don't know if that's because I'm an exhibitionist or because I have a more-healthy attitude toward sex in general. I don't shy away from cameras and spotlights, whether it's with sex or not."

Mia was born in Australia and lives in Las Vegas. She's 5'7" with long legs. She's been a dancer. She has also managed rock bands. She came to our attention "when a friend suggested I write to you, and I did!"

We're glad she did. So are Jake and Alex. They're the dudes enjoying her in this scene.

So Scotty shows up at the D'Aire residence looking for his buddy. But he's...

Texas Rose, 57, is late for work because she had to call the plumber...

"I saw your ad on Backpage.com," Gina Milano, a 60-year-old divorcee who's fucking on-camera...

"I'd never experienced an orgasm until I met my third husband," 60-year-old stunner Chery...