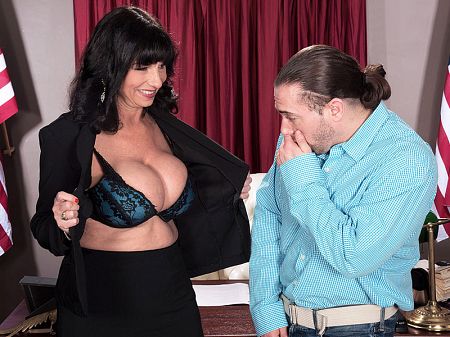 Supposedly, people are tired of politicians who keep doing things the same old way and expect anything to change. But 50-year-old Elektra Lamour is not one of those politicians. She’s an outsider, a woman who wants to do things a new way, her way.

So when the guy who’s applying for the job as her campaign manager shows up at her office, Elektra tells him that she wants to have a more hands-on, one-on-one approach to working with people and getting votes. She wants to attract the blue-collar workers.

Or did she say boob-collar workers?

See More of Elektra at 50PLUSMILFS.COM!

Beth McKenna's friends and family back home in Mississippi don't know that this 52-year-old...

In her second fuck video at 40SomethingMag.com, 48-year-old Amelia Mack has a surprise for...

Beata doesn't waste any time getting to it in this scene. Right away, this...

Jewel needs help moving a trunk, so she calls her friend Gloria and asks...

Coming to 40SomethingMag.com, showing off her hot body and fucking on-camera a time or...