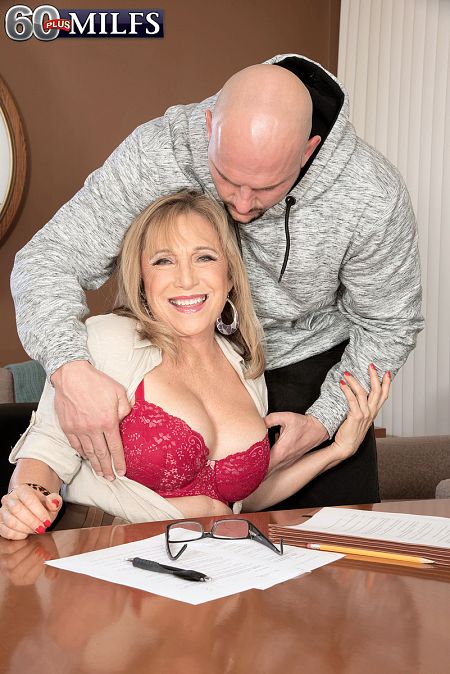 Luna Azul, who's 64 years old, is a teacher. She's wearing glasses and a button-down top that's not buttoned just enough. JMac, who's young enough to be her son but not young enough to be her grandson, is her student. As students go, he's a bit on the old side at 31, but you know how it is these days with adults going back to school.

Anyway, JMac isn't doing too well in Ms. Azul's class. She's concerned about his grades. In reality, she's really concerned about his cock. She wants it. The deal she strikes with him is that every time they fuck, she'll give him an "A." He probably would've done it for a "C." Or an "F." Or just for the hell of it. After all, Luna is one hot GILF.

Luna says the best compliment she ever received was, "You are so hot and sexy."

We're sure he meant it as a compliment.

Everywhere she goes, Sha attracts a huge amount of attention. The people she meets...

"My friends would be very surprised to see me here," said Jilly Smith, a...

Who takes a shower with her clothes on? A girl who wants nothing more...

You can file this scene under "All Action, No Talk." The action is with...

Seka Black, the sensational 64-year-old wife, mother of five and grandmother of 11, is...