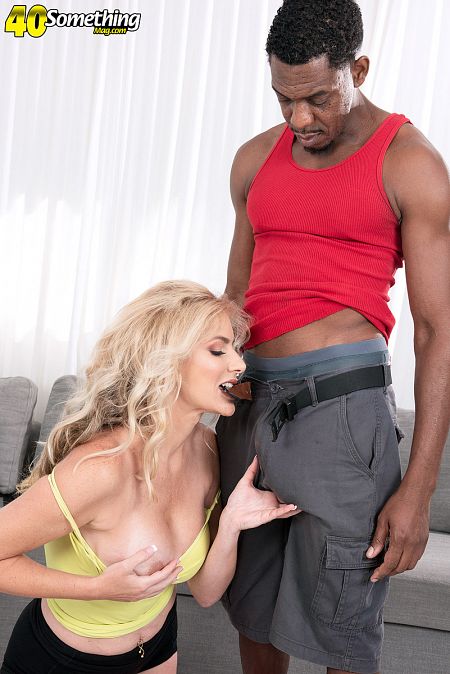 Lexi Sapphire didn't want to tell us how old she is.

"A gentleman never asks and a lady never tells," she said.

Well, we never said we were gentlemen. As for Lexi, she's definitely every inch a lady with her long, blond hair and impressive body. And although she didn't tell us when we asked her, we just happen to know that she's 49 years old. Heck, anyone who's 49 and looks as great as Lexi does should be proud of her age. She should scream from the rooftops, "I'm 49 and I've got this body!"

This is her first-ever hardcore scene.

"This is a step above stripping," Lexi said, "and I guess every little girl's dream is to be an actress, and in my little world, this is my acting gig."

Here, Lexi is a fitness instructor. She's wearing a sheer, yellow top with no bra that her hard nipples are poking through. She's wearing short, black workout shorts that are so tight, we can see some cameltoe.

Jonathan, her client, notices. She stretches in front of him, and before long, she's shoving her cameltoe in his face, and away they go!

Lexi used to be an exotic dancer. If you saw her out in public, she'd probably be wearing "my gym clothes or a cute little sundress or a skirt with a midriff top."

She's a nursing assistant. She isn't a swinger. She isn't a nudist, either, but she said, "I wouldn't mind that."

She told us she had sex with a much-younger man when she was 35.

"He was 18," Lexi said. "He was my niece's love interest, but he liked me a lot more. We were at a party and he followed me to the bathroom, where we made out. Then later, we went out on a date, had dinner and went to a movie, and then we went to a hotel room, where he proceeded to seduce me. I was blown away that a teenager was so good in bed."

And we're sure he was blown away by Lexi, too. 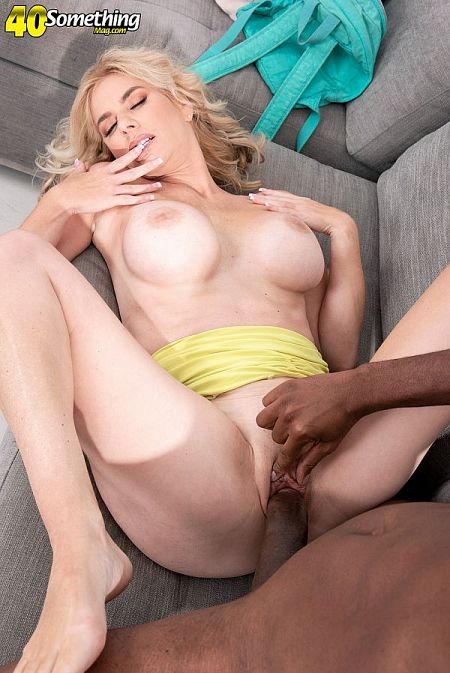 Here's Barushka, a 56-year-old, hot-bodied mom who had never fucked on-camera until she came...

"I wanted to do a professional photo shoot, so I asked my husband to...

Valory has a thing for wild, pornotronic lingerie. The kind of bedroom wear you...

A woman knows when she has a sniveling man in her clutches. She knows...

"Every part of me is feminine, from head to toe," said Kat Wiley, a...

"I came from a more-conservative job, and for certain, it wasn't acceptable to talk...