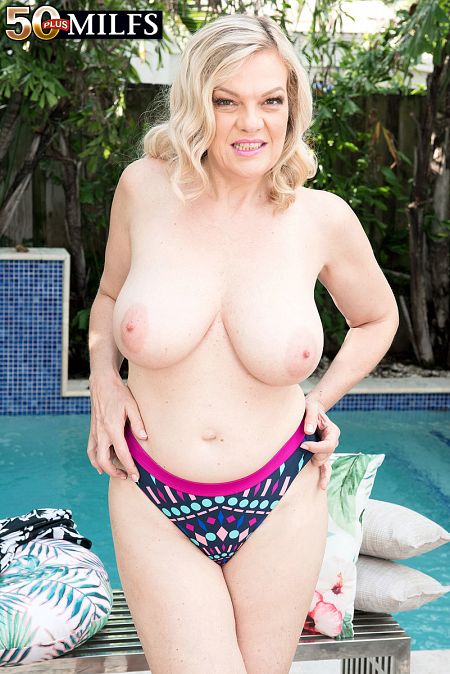 "I'm a one-woman show," said Lena Lewis, a 54-year-old, big-titted blonde who was born in Germany and lives in New York City. "I like being watched. I've never been in a situation where somebody could watch me having sex until I came here. But I like to have sex, and if there's the possibility that someone can see me doing it, that's very exciting."

Lena has been an analyst, a personal assistant, a cabaret performer, a burlesque dancer and a bartender. She isn't a swinger or a nudist. We found her when she put out an ad looking for modeling work.

"I love younger men, and I'm not even talking about the guys I had sex with in your studio," Lena said. "I recently had sex with a 19-year-old. He was cute but inexperienced. He wanted to be guided, so I taught him how to please a woman and how to be pleased. I got to teach him a lot. He had amazing staying power."

Lena told us what she does for her men to make them feel special.

"Out of bed, I'll cook his favorite food and serve him breakfast in bed. Have a quickie when he comes home from work. Plan a romantic getaway.

"In bed, I'll wear sexy lingerie, use sweets, like chocolates, when making love, give him a lot of oral foreplay and give him a lap dance."

She's a heckuva woman. Somehow, she's never been married. The line forms around the pool, guys.

"I'd never experienced an orgasm until I met my third husband," 60-year-old stunner Chery...

When this scene opens, 48-year-old Amber Lace is wearing short shorts and a halter...

In her return to 60PlusMILFs.com, 65-year-old wife, mother and grandmother Leah L'Amour sucks and...

As The Rolling Stones once said, "You can't always get what you want. But...