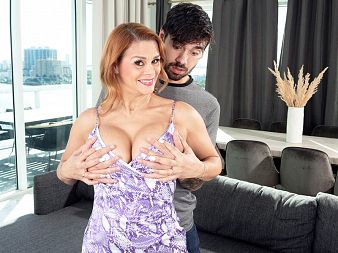 Welcome to Juliett Russo's dance studio, where she does the cha-cha with her students' cocks. Today, the lucky student is 23-year-old Nade. He's getting married, but he doesn't know how to dance. Turns out, though, that he gets very little in the way of dance lessons from this hot, sexy, 54-year-old Latina. Nade never learns how to dance, but he does get a lesson in what to do on his wedding night. Although if we were in his shoes, we'd ditch the fiancé and keep going for dance lessons.

By the way, Juliett told us, "I'm a teacher. I worked as a teacher in my home country."

That would be Venezuela. These days, she lives in Miami. She's divorced. She's a mom.

The last time she was here, Juliett had sex with a 26-year-old, so the guys are getting younger. We asked her if she'd ever had sex with a much-younger man before coming here, and she said, "Yes, I have. He was a friend of a friend whom we hang out with. At the end of the night, we ended up in a hotel. He was the first young guy I had sex with."

Milan was the second. Nade was the third. Noticing a trend?

"I was a late bloomer," said 55-year-old divorcee and mom Velvet Skye, who bloomed...

Now it's time to get to know Lisa Marie Heart, a 60-year-old stunner from...

"Romance is sexy along with manners," said Bella Dea, a 54-year-old super-MILF from Southern...