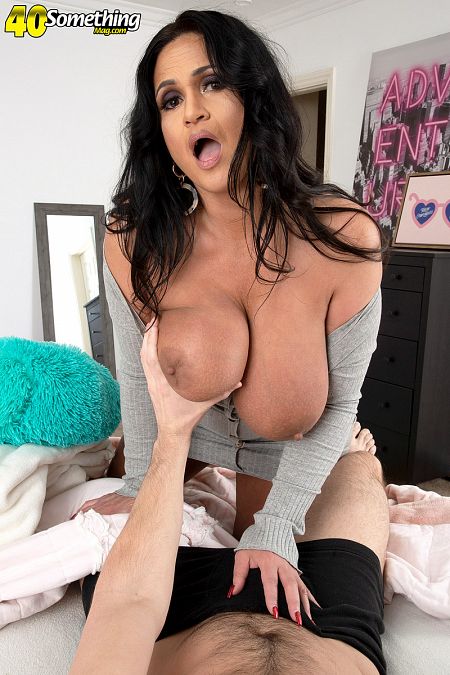 When the daughter's away, the mom...well, what does the average mom do when her daughter isn't home and she finds the daughter's boyfriend fast asleep in said daughter's bed? We're guessing that most mothers wouldn't be so happy about this. They'd wonder why their daughter brought home a guy--and slept with him, right under the parental roof--without asking permission. Not that permission would have been granted. In most cases.

But Kailani Kai, a 47-year-old divorcee and mom from Hawaii, isn't like most mothers. For one, she's super-sexy with a very curvy body: big, juicy, round ass and huge tits...tits she recently super-sized so she could attract the attention of young men. Most moms do not do that.

Another thing most moms don't do: suck and fuck cock on-camera for all the world to see at an international website. Indeed, that makes this mother special.

So here's Kailani, looking sexy as usual, doing some housework, suddenly aware that her daughter, Amanda, isn't home and there's a strange man--a very young man--sleeping in Amanda's bed. So she walks in. Introduces herself. Asks how long he and her daughter have been dating. Tells him she wants to get to know him better.

Turns out she hasn't.

Like we said, Kailani is not the average mom. And her daughter wouldn't like this if she found out. But the way we see it, if you're a young girl and you have a hot mom like Kailani, you have to keep a close eye on your mother. Because if you don't, this might happen.

Sandy, aka Sandy Bigboobs, gets her week off to a great start by showing...

In this scene, Kelly Scott, a 54-year-old divorcee, mom and grandmother, is a flight...

A guy doesn't have to hand it to Julia Juggs. The sultry, curvy brunette...

This past summer, in her first-ever hardcore scene, Penelope Star sucked and fucked JMac....

Glamorous? Sure. Very hot? Yes, indeed. The only other thing Dusty needed was a...