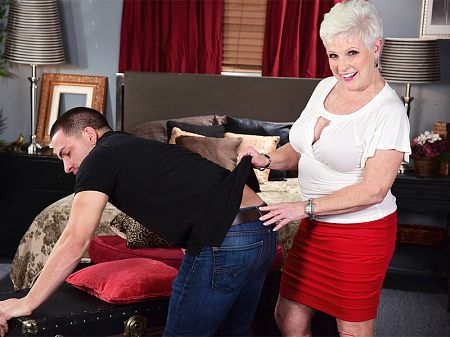 Jewel needs help moving a trunk, so she calls her friend Gloria and asks Gloria's son Peter to come over and help. Well, he's only in his 20s, but apparently he's not in the best of shape because he hurts his back while moving the trunk. So Jewel rubs his back, then she has him lie down. She pours lube on his back.

"It works for all body parts," Jewel says.

She slips his jeans down. He's not wearing underwear. Peter's a bit shy about this, but Jewel says, "I helped raise you boys. You don't have anything I haven't seen before."

Other than his hard-on, which she starts stroking and sucking.

"Maybe massaging your hard cock will take your mind off your sore butt," she says.

Jewel is 67 (she turned 68 shortly after this scene was shot). Peter is easily young enough to be her grandson (but he isn't). Jewel is married and has children and grandchildren. Her husband knows about what she does in our studio, but her kids don't. Really, who expects their white-haired granny to suck and fuck cock on-camera?

Nobody. And that's one of the things that makes Jewel and all of our ladies so special. Jewel? She's really special.

When this scene opens, 62-year-old Caroline Hamsel is standing on a street in a...

It is a masseuse's job to loosen up your muscles, not tighten them and...

In her much-anticipated return to 50PlusMILFs.com, Jynn, a 51-year-old wife, mom and former teacher,...

It's time for some poolside fun with 64-year-old Seka Black. This smokin'-hot mother and...

We have a huge inventory at The SCORE Group, and sometimes, photo sets and...