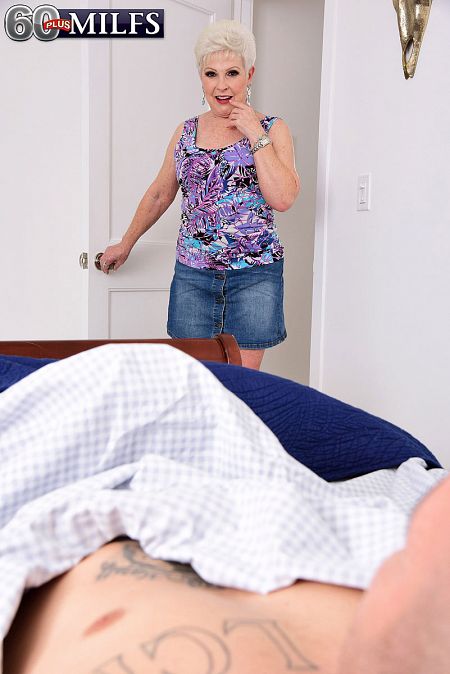 The fact is that 67-year-old Jewel has children and grandchildren, and maybe some of those grandchildren have friends who have seen Grandma Jewel sucking and fucking at 60PlusMILFs.com. Which brings us to this scene.

Jewel has been doing some gardening, and when she comes inside, she spots her grandson's best friend jacking off in the guest bedroom. Now, most grandmothers would scream or run away or say, "What are you doing? Get out of my house immediately and never come back!" Maybe they'd pass out from the shock.

But Jewel isn't like most grandmothers. She watches him for a while then walks into the room and catches him off-guard. She pretends to be shocked. He's mortified, but his cock is still hard. He confesses that he's been jacking off to her every morning since he's been there. Jewel knows how to take a compliment, so she jacks his cock for him then sucks it then fucks it. She talks dirty to him, too. Hey, we never said Jewel was your average grandma.

Jewel is 68 now (she was 67 when this scene was shot). She's married and lives in North Carolina. She's one of the most down-to-earth women you could ever meet, and she's always a pleasure to have in our studio. She's a nudist but hasn't been a swinger for a long time. She doesn't have any fetishes.

She is, in almost every way, the epitome of the Southern belle. Almost.

Jessie Reines wastes no time letting us know what she's going to do in...

Kim Anh, 61 years old when this scene was shot and one of the...

"I'm an exhibitionist," the adorable, doll-like Contessa Rose said. "Anything that involves the outdoors...