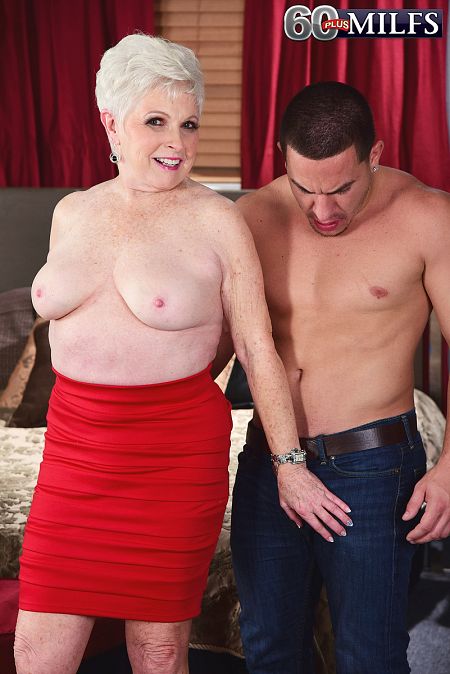 Most guys don't expect to get seduced by their best friend's grandmother. Peter certainly didn't when he went over to her house to help her with some moving. But, then again, most grandmothers aren't like Jewel.

Yes, Jewel, one of the greatest GILFs ever, the ultimate golden girl with her gray hair and low-key granny looks, is back. She's 67 years old, and she looks great. She feels great, too. Jewel told us so. Peter told us that Jewel's mouth and pussy felt great.

"You've grown up to be such a big strong man," Jewel tells Peter, who's 23 years old. "I pretty much helped raise you boys."

She's raising him in a different way now.

Jewel actually turned 68 just the other day, but she was a few days short of that when she shot this scene. She's still married, still living in Charlotte, North Carolina, still living the good life. She says her family would still be surprised to see her here; she's never been found out.

Milan is sleeping. Juliett Russo, a 54-year-old divorcee and mother of two daughters, is...

"Most women are so shaved," 54-year-old first-timer Kelly Scott said. "They don't realize that...

Vanessa, a 51-year-old hottie from Argentina, was a big deal on 40SomethingMag.com back in...

Today, Justine, a 53-year-old mother and grandmother, is going to take off her tight...