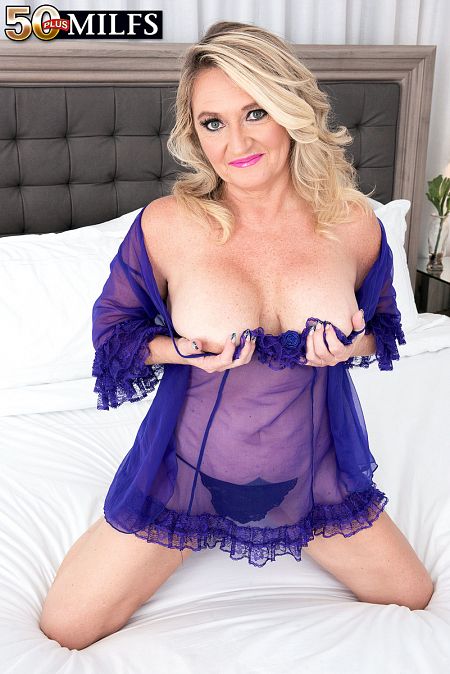 Wife and slut DayLynn Thomas, 50, looks so sexy with her big tits in see-through lingerie. She has a pierced pussy that she loves to play with for your jacking pleasure, and she keeps up a steady stream of fuck talk in this red-hot solo scene.

50PlusMILFs: When did you get the tattoo above your pussy?
DayLynn: For my 50th birthday.

50PlusMILFs: So, you went to the tattoo parlor to get the tattoo on your pussy. The tattoo artist: male or female?
DayLynn: Male. We told him what we wanted and would he be comfortable putting it in a private place, and he said he would be. He had a girlfriend, but he said, "It's not between your legs, so I can do it." And I have a piercing on my pussy as well. That guy had to get between my legs. He didn't have a girlfriend. Rules, rules!

50PlusMILFs: Was it turning you on when he was giving you the tattoo?
DayLynn: It's a tattoo, so I can't say that it was a big turn-on, but the idea of getting the tattoo was a big turn-on because I have been married for 30 years, and this is my tattoo for my master, so it is a turn-on that what I was doing was a permanent expression for my master that my husband will always see.

50PlusMILFs: Did the tattoo artist have a hard-on while he was giving you the tattoo?
DayLynn: I couldn't tell, but for my piercing, he had never pierced a clit before, and we had 15 guys in the room.

50PlusMILFs: Why?
DayLynn: They were other tattoo artists, people from the shop next to him. Just a collage of gentlemen who enjoyed the piercing experience.

Today, 60-year-old Cammille Austin is going to show you how she gets wet in...

When this scene opens, 51-year-old wife and mom Mandy Monroe is taking a shower....

"I love to touch my body," 62-year-old Caroline Hamsel says at the start of...

Sexy Lexy Cougar, a favorite at 40SomethingMag.com, is going to try an experiment today...

In this scene, 52-year-old wife and mom Babe Morgan is a realtor who's showing...

It's not often that you see a 50-year-old woman putting on a bikini show....