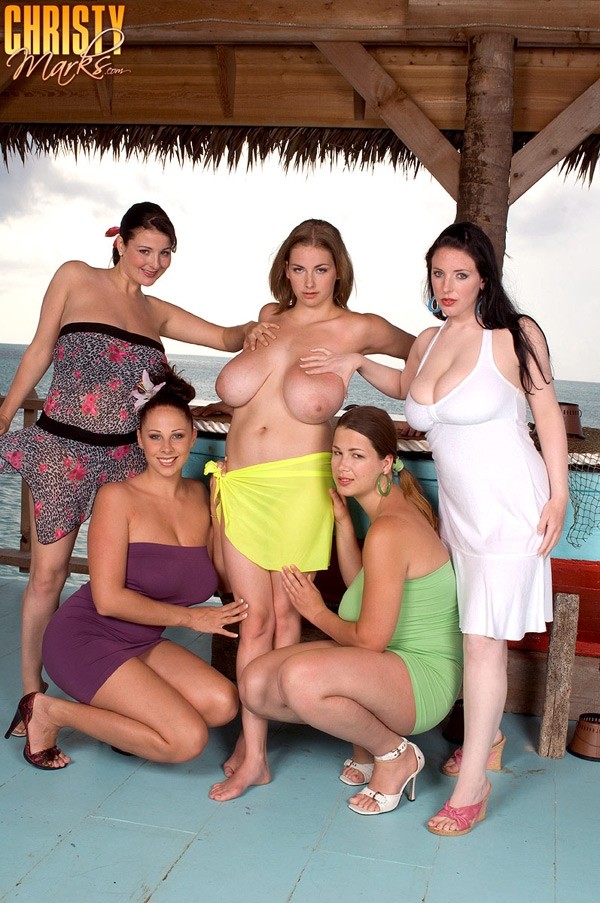 When we sent five of the bustiest ladies around (Lorna Morgan, Christy Marks, Gianna Rossi, Angela White and Terry Nova) to the Bahamas to film the feature Big Boob Paradise, we hoped that the girls would get along. What we didn't expect was that they would get along as well as they did. In fact, we couldn't get them to keep their hands off one another. If we attempted to do a solo shoot, one or two girls would wander over and then all of a sudden, it was a lezzie Lickapalooza. We finally decided if we couldn't beat 'em, we could beat off to them. So we invited all the girls to shoot together and what happened was a moment in big tit history. Watch as the girls oil up Christy's tits and knead and squeeze them. If that doesn't get you pumping your dick, then you're dead from the waist down! There is nothing like many helping hands on a pair of horny hooters like Christy's. There's a reason this was Big Boob Paradise!

We know you know how to jack off. Cora Comfort, a 46-year-old divorcee and...

"My wildest sexual encounter was at a sex store," said 46-year-old mother of two...

Meet DayLynn Thomas, a 50-year-old from Indiana who now lives on the west coast...

If you saw Arianna on the street, and had never seen her on the...

Daylene was surfing the Net when she came across BeASCOREModel.com. She's an exotic dancer...

When the time came for super-GILF Sally D'Angelo's annual visit to 60PlusMILFs.com, we asked,...

"Absolutely amazing boobs - both size & shape. Plus a beautiful face with a...