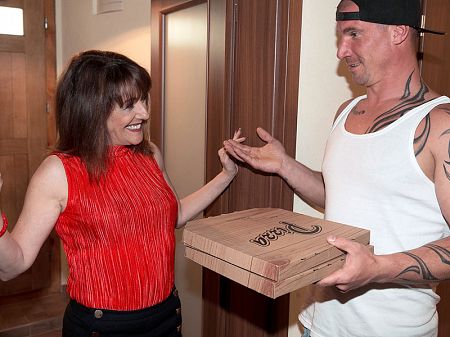 She invites him in and opens the pizza box, checking for artichokes.

"I'm sure there's something I could choke on," she says. "Come with me."

The thing is, he doesn't speak her language and doesn't understand a word she says...until she says, "I would really love to fuck you." "Fuck" is one of those words everyone understands.

So Pandora takes him to her bedroom, where she sucks his dick, hops on top of it, rides it hard and jacks him onto her pretty face. The pizza's getting cold, but that's what microwaves are for.

Anyway, about Pandora. She's from Luton, which is north of London. She's a mother and grandmother. She works in wedding planning. She's divorced. She's a swinger. She likes men who wear suits. We found her on Twitter. The best job she's ever had?

"Shooting for you, of course!"

See More of Pandora at 50PLUSMILFS.COM!

Lisa Marie Heart, a divorcee, mother and grandmother from Phoenix, Arizona, has done a...

The sight of 54-year-old Lena Lewis in a tight, low-cut dress that shows off...

Sherry Stunns, 51, is sunbathing by her pool, wearing a bikini that her big...

In her first-ever scene at 40SomethingMag.com, 40-year-old divorcee and mom Sylvia Kay is dressed...

If this is how all of Dimonty's dates go, she's a fun woman to...

When we asked super-stacked 63-year-old Sally D'Angelo to tell us one thing about her...