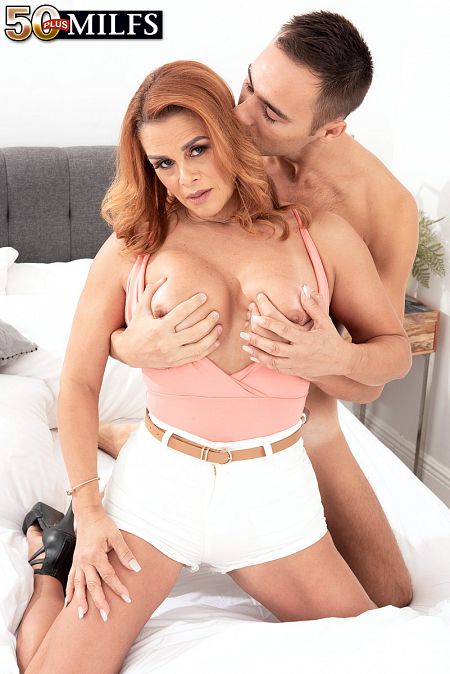 You know those dreams you've had in which some woman is sucking your cock? It seems so real, it feels so good, but when you wake up, all you have is morning wood or maybe a mess in your pants.

Well, today, Juliett Russo, a 54-year-old divorcee and mother of two daughters, is going to turn a lucky guy's dream into reality. The fact that the lucky guy is her daughter's fiance doesn't matter to her. She's been checking him out for a long time, and now she's got him where she wants him: in bed, fast asleep, dick hard, unsuspecting.

Daringly, Juliett starts sucking his cock. Hey, her daughter's not around, so why not? Milan is feeling good, but when he wakes up and sees who's sucking his cock--his future mother-in-law!--he can't believe it. But he doesn't try hard to stop her. Besides, Juliett has his cock in her mouth, and that means she's in control.

Milan is 26 years old. We asked Juliett if she'd ever had sex with a much-younger man and she said, "Yes, I have. He was a friend of a friend whom we hung out with. At the end of the night, we ended up in a hotel. He was the first young guy I had sex with."

Juliett is from Venezuela and lives in Miami, Florida. She's 5'2", 128 pounds with C-cup tits. They look bigger to us, but we're not going to argue with a woman, especially when she's wearing bras that are too small for her chest. She's into pole dancing, cooking and baking. She likes humble men with a sense of humor. She once had sex in a boat. She's never had sex with another woman. And she's not a swinger or a nudist.

40-year-old wife and mom Denise LaFleur is doing some tidying up around the house...

This innocent dude comes a knocking, wanting to check out a water-view apartment that...

Karina's yacht has gone aground and now she's shipwrecked on this deserted isle! It's...

Is it hot to watch a woman as she does the dishes? It...

Penelope thinks she's all alone in her house, but she isn't. JMac, whose friend...

In this lovely scene, lovely and sexy mom and granny Cammille Austin sucks and...