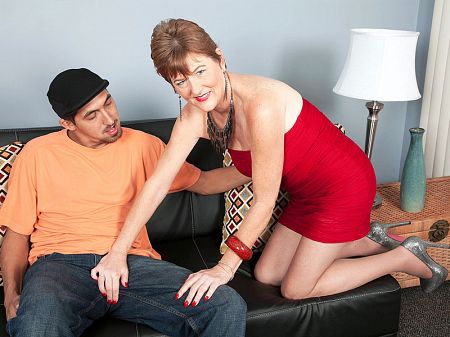 "I usually wait for the man to initiate things, but it is not above me to get things going," said Allura James, a 53-year-old wife, mom and swinger from California.

"The most stimulation I get sexually is when my pussy is stimulated with a man's hands or with his fingers in me or when a toy is used and hits the right spots," Allura said. Juan was her boy toy for the day and, Allura said, "He definitely hit the right spots!"

"I'm pretty straight," she said. "The most that has happened was some light touching, kissing and tit-sucking, mostly by the women to me."

That's okay. We love a woman who's 100% into cock. That's definitely Allura.

When this scene opens, Samantha White, a 44-year-old wife and mom, is enjoying some...

In this blast from the past--a scene that has never been featured on 50PlusMILFs.com...

Charlie Charm, a 63-year-old blonde, says a man gets her attention with intelligence, respect...

It's play time with Jessie Reines, a 49-year-old wife, mother and grandmother from Tennessee....

We've known since she debuted in March 2019 that Victoria Lobov is a very...

Roxy Royce's husband is away, and she's ready to play. She's sitting at an...