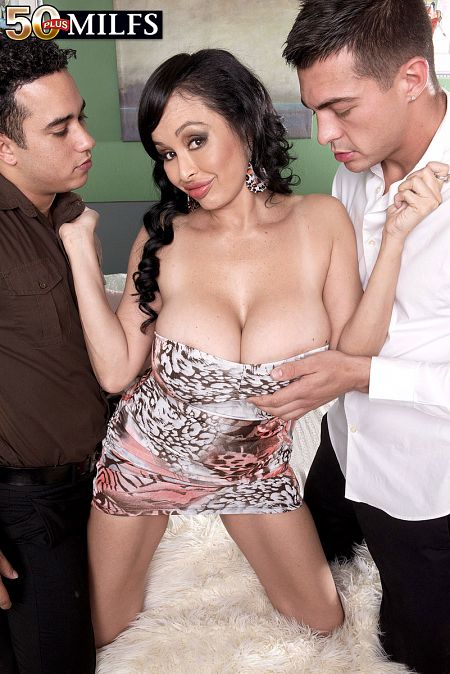 "I love a good dick size," 50-year-old Hawaiian hottie Claudia Kealoha said. "And I love confident, assertive men. I love to have my nipples sucked a lot and my tits squeezed and played with."

Claudia gets what she wants in this scene from two young, big-dicked studs, guys who are young enough to be her sons. Rocky is 24. Johnny is 26. She's impressed by their cocks when she gets her hands on them. Both of Claudia's boobie-calls are tit-men and keep her nipples tingling by sucking them as they pound her pink in a wide variety of positions, take turns fucking her hooters and fill her mouth with cocks and balls.

Then, finally, Claudia told us it was okay to put her on 40SomethingMag.com, so we did, and then we put her in the Big Racks, Hot MILFs DVDs, and now she's debuting at 50PlusMILFs.com.

Claudia is a bit of a nomad. She'll move to one city, dance in the clubs there for a while and then move on. Sometimes she's in Fort Lauderdale and sometimes Hawaii. She could be in Tampa or Sarasota or Arizona. The woman doesn't like to sit still. However...

"I would say I'm really passive sexually although others might disagree. I did enjoy being with two guys. I'll be honest, Johnny was way too big for my pussy. But we did a lot of foreplay off-camera to pull the scene off. Rocky is big but very doable and yummy. Me and Rocky had talked story, like we say in Hawaii, and got to know each other quite a bit while we were in the dressing room and waiting.

"I love sex, and it's all about having fun," 58-year-old wife, mother and grandmother...

"I'm just a small-town housewife who wants to have a little fun," 47-year-old Lucy...

All about 55-year-old wife and mom Maddie Cross, who sucks and fucks 27-year-old Milan...

Roxy Royce's husband is away, and she's ready to play. She's sitting at an...