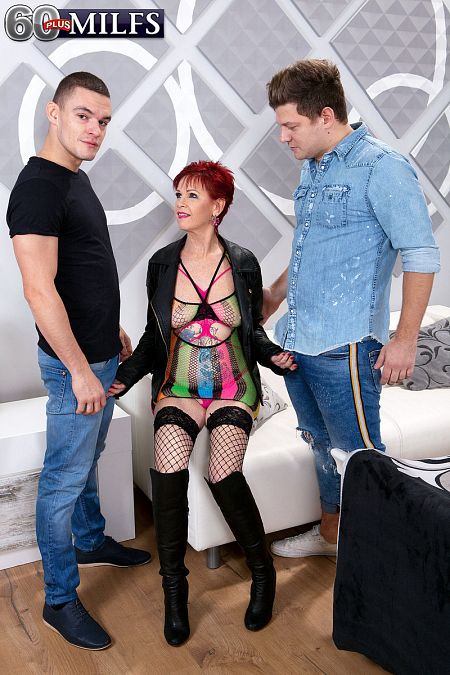 Caroline Hamsel is a hooker. There, we said it! What we mean is that in this scene, Caroline--a wife, mother and grandmother--is a 62-year-old street hooker dressed in a very sleazy outfit. She's wearing a fishnet dress, a leather jacket and knee-high leather boots. She's smoking a cigarette. Yeah, she looks like a cheap whore. That's exactly the point.

And we're going to bet that five minutes later, Caroline was back on that same street, looking for more strangers to fuck.

By the way, the guys fucking her are 29 and 26 years old, meaning their combined ages don't equal Caroline's.

We asked if she's changing sexually as she gets older, and she said, "Definitely. I'm becoming more sexually assertive. I've been with a lot of younger men, some as young as 19. I love their energy and hard cocks, and they seem to love me, which is very nice.

"Iâ€ˆhave a lot of sex, sometimes 15 or 20 times a week, including with my husband, so I'm getting even more experience. There are not a lot of women my age Iâ€ˆknow who have sex as much as Iâ€ˆdo. They don't know what they're missing. I'm finding that I'm becoming hornier and more-sexual as Iâ€ˆget older. My husband can't keep up with me!"

Virginia Simms was discovered by one of our correspondents in Prague. She was a...

Jonathan likes it rough and gets it rough. His lady of the evening is...

To some women, a lube job means getting your car's oil changed every 3,000...

So a guy (we'll call him Matt) goes to the doctor (will call her...

In her return to 60PlusMILFs.com, 67-year-old Blair Angeles puts on a show just for...