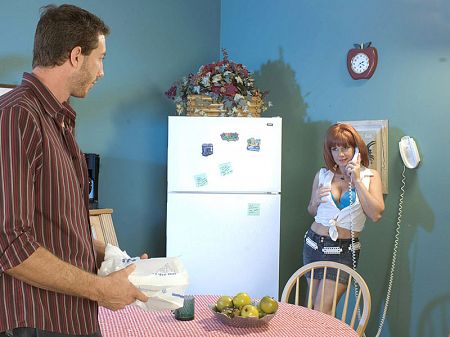 In a scene from the movie I Fucked Your Wife Again that has, somehow, never appeared on any website, Calliste Garnet, a 48-year-old hottie from San Francisco, fucks the 28-year-old delivery boy. The guy has just delivered Calliste's food order, but her hubby isn't going to be home for an hour.

"The food's going to be cold by the time you get here," this scorchingly hot redhead tells her hubby over the phone.

Calliste was working as a cocktail waitress in a casino on the Vegas strip when she first shot for us. As for this scene, she told us, "It was fun making believe I was a wife who was cheating on her husband because if I had to do it all over again, I would've cheated on my ex-husband. Hey, he cheated on me, and I was dying for cock at the time. But now I'm getting all I want and more. I plan on satisfying all of my fantasies."

Calliste's fetishes: "I love having my feet and ass worshiped."

Panties? "I only wear thongs."

When this scene was shot, we asked Beth Sinkati, a 57-year-old divorcee, mother and...

When we asked Kailani Kai, a 47-year-old divorcee and mom from Hawaii, what she...

"I'm a girly-girl when it comes to makeup, nails and my hair. But I...

Sandra Star loves to wear skin-tight dresses, tops and skirts. What she has on...

The Czech Republic never lets us down. It produces a seemingly endless supply of...