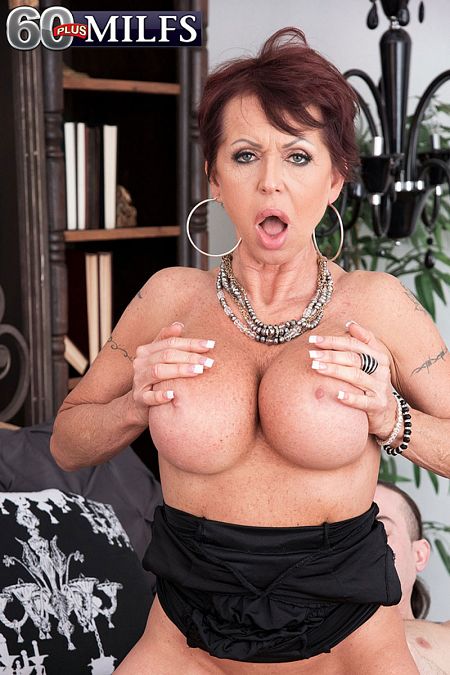 "I saw your ad on Backpage.com," Gina Milano, a 60-year-old divorcee who's fucking on-camera for the first time, told us when we asked her how she found us. "It was spur of the moment. I told myself, 'Why not? Why not try something different, something new, something I had been curious about for a while? If not now, then when?' It was a no-brainer."

When we saw Gina's test shots, our decision to photograph her was a no-brainer. She's beautiful. There's something hyper-sexual about her. She has a great body with long legs and DDD-cup tits. And she was turning 60, which made her even better.

Gina was born in Milan, Italy and now lives in San Diego, California, where she does some webcam modeling. She isn't a swinger, but she's done some swinger things.

Gina calls herself a beach bunny. She loves tennis, hockey and fast cars. Her hobbies include listening to music, dancing and working out. She likes guys with a wild side "who know how to get me off and then fuck me for hours. A gentleman but an animal in the bedroom."

She likes younger men. The guy she's with in in this scene is 30. That's half her age.

"My ex was 10 years younger than me," Gina said. "I always have liked them younger. Don't ask me why, but they go after me. Even now, guys in their mid-20s or 30s would like to fuck me. I could be their mom easily."

We know exactly why the younger guys go for Gina. You will, too, when you see her.

It's exercise day for Jynn, a 51-year-old wife and mom (and former gymnastics coach)....

"I did all of the family things and now I get to do the...

"I love to be watched," wife and mother of three Kenzi Foxx said. "I...

"Hello. My name is Keli Richards, and today, we are going to talk about...