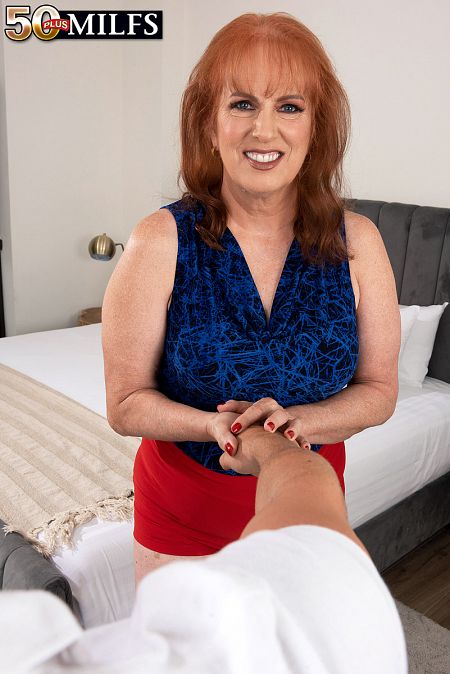 So says Brie Daniels, a 58-year-old redhead who, today, is sucking and fucking on-camera for the first time. Brie is divorced. She has kids.

"I did all of the family things and now I get to do the me thing," Brie said.

She does her stud. He does her. He's a lot younger than her--easily young enough to be her son--but that's fine by Brie.

"The youngest man I have ever been with, I felt afterwards that I should have carded him," Brie joked. "He was sweet but trembled like a frightened bunny, but I soothed him enough until he came twice for me.

"I'm sexually assertive with younger men. They typically need guidance or are unsure...men who want to have sex with their best friend's mother or their neighbor's mother. But at heart, I'm a bit of a submissive and desire men who want me to sexually serve them. Be a naughty little dirty slut."

Too darned cute! Too sweet! A shot of insulin is needed when you look...

Jack is studying for his final exam when Cashmere walks in, wearing glasses, looking...

Now for a lady whose appearance here is long overdue: Minka, the world's bustiest...

When this video opens, 64-year-old wife, mother and grandmother Seka Black is wearing a...

Johnny, who's 23 years old, walks into his girlfriend's house and hears moaning. He's...