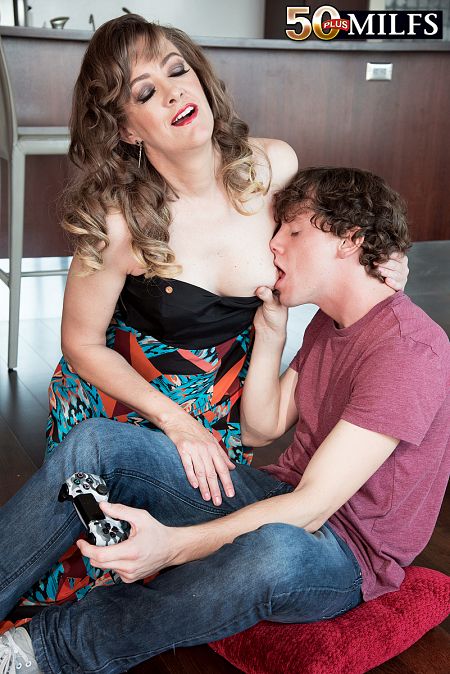 "The people who know me through ordinary circumstances would be astonished and might want nothing to do with me after seeing me here," Babe said. "My family would probably disown me. People in the swing lifestyle would be surprised, but they would likely congratulate me."

One person who would congratulate her (but wouldn't be surprised) is 60PlusMILF Leah L'Amour, who's been sending a lot of great MILFs our way.

And here she is!

Babe is 5'7". She has blue eyes. She's worked in restaurants. She and her husband owned a flower shop for a while.

"But this could be the most-fun job I've ever had," she said.

She'd never had sex with a much-younger man before she showed up at our location in Los Angeles, and we changed that in a hurry.

"I like to be watched," she said. "My husband and I have been watched at a swing club about six times."

Get ready to be watched by thousands and thousands, Babe.

If you watched the Granny Fuck Club roundtable discussion, you know that the other...

The last time we saw newcomer Missy Masters, a 48-year-old divorcee and mother from...

Now it's time to get to know DayLynn Thomas, a 50-year-old, self-described "hot slut...

Missy's husband comes home, and Jax is with him. She's looking very sexy in...

When Rose Marie, a 49-year-old former nurse from Arizona, shot this scene, she told...

Compare this set to some of Nicole's earlier ones, in which she would either...