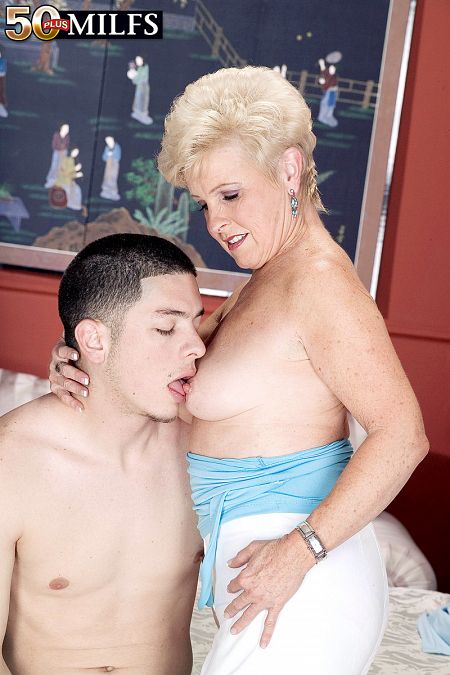 In this blast from the past--a scene that has never been featured on 50PlusMILFs.com or 60PlusMILFs.com-Jewel, one of the greatest grannies ever, sucks and fucks 26-year-old Alex.

We once said, "If this is the golden age of mature women--and we think it is--then Jewel is the gold standard, the woman by which all others must be judged. Any list of the greatest 60somethings ever has to include this classy, beautiful wife and former executive secretary from North Carolina."

Jewel is charming, classy, funny and sexy all at the same time. She's the epitome of the old-fashioned Southern belle...until her clothes come off. Jewel recalled her first time with The SCORE Group, back in 2005.

"I was attending an adult convention in Las Vegas," she said. "Somebody referred you to me. It's one of the best things that has ever happened to me!"

She's one of the best things that has ever happened to us.

By the way, we know that most of you are stuck at home these days. We're going to try to keep you as entertained as possible with regular postings of brand-new and vintage scenes. Like this one. Enjoy.

See More of Jewel at 50PLUSMILFS.COM!

Now 45 years old, Karen Fisher, a girl who started modeling for The SCORE...

"I'm just a small-town housewife who wants to have a little fun," 47-year-old Lucy...

Can you imagine living next door to a hot, sexy, big-titted babe like Maggie...

"I love going out in a low-cut, skimpy dress and the highest heels possible,"...

Arianna puts every Victoria's Secret model to shame in this pictorial, shot on Grand...