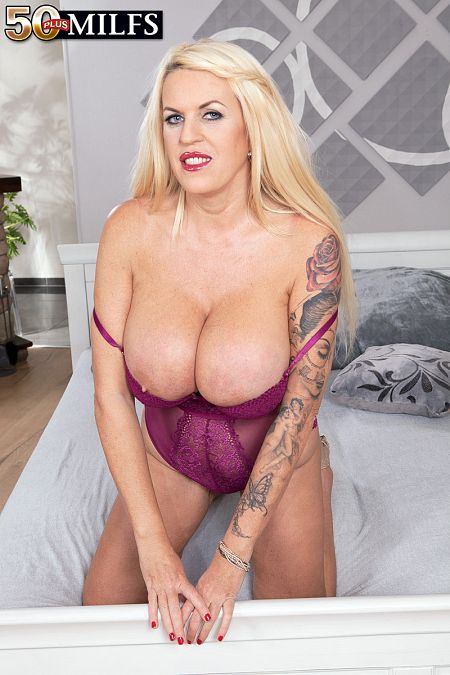 “I was very thin when I was younger and I had very small, perky breasts,” Shannon said. “I played hockey and tennis in school. I always wanted huge boobs and now I have them. I admire women with very big chests. I get a lot of attention now from males. I enjoy it but it’s all just fun.”

Shannon got her MM-cup tits with the money from her divorce settlement. She came to our attention in 2017, when the UK tabloids made a big deal out of what she did with her divorce money. We got in touch with Shannon, and before long, we had her in our studio, sucking and fucking on-camera for the first time for 50PlusMILFs.com and SCORELAND.

“What I do now is the best. I wish I had done this sooner.”

Hey, you know what we say: better late than never.

The setting here is pretty classy: a marble statue, furnishings that look like they...

Seka Black, a 64-year-old wife, mother and grandmother who can never get enough, calls...

50something homebody Gia Giancarlo is lying on her sofa one afternoon, half-dressed while reading...

A married mom with a high sex drive and big tits, 46-year-old Sandy has...