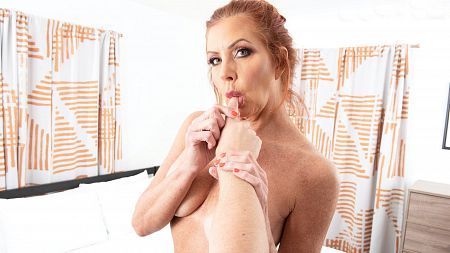 In this cinematic tour de force, we finally find out what happened behind closed doors in the classic 1967 movie The Graduate. Of course, we know that Mrs. Robinson, played by Anne Bancroft (who was only 36 at the time), has sex with the recently-graduated college student Benjamin Braddock, played by Dustin Hoffman (who was actually a lot older than he looked). We know that she sucked his cock and gave him the fuck of his life. How do we know this when it was never shown on-camera? Well, he kept coming back for more until (and this never made any sense to us) he fell for Mrs. Robinson's daughter. What kind of idiot trades hot sex with a MILF for boring sex with a 20-year-old?

Well, here, we got it right. Benjamin knocks on the door. Mrs. Robinson, played by stunning 50-year-old redhead Ginger Robinson, tells him to come in. She's sitting on the edge of a bed wearing a short black dress, fishnet stockings and no panties.

"Are you trying to seduce me, Mrs. Robinson?" Benjamin asks.

"Do you want me to seduce you, Benjamin?" Mrs. Robinson says.

"I don't know," he says. "You've been best friends with my mom all my life. You've known me since I was a child. What would Mr. Robinson think?"

"I don't care what Mr. Robinson thinks," she says. "Now unzip me. It's a simple request."

And there it is: Further proof that 50PlusMILFs.com is a million times better than Hollywood.

In this video interview, 45-year-old Asian cougar Lucky Starr tells and shows us the...

Erica and Madison, two of the sexiest grannies you'll ever see, are enjoying a...

Claudia Fox, who's 51 years old and one of the hottest, sexiest MILFs we've...

"In my younger years, I sold real estate, which I enjoyed very much," 50-year-old...

Now it's time to get to know Cyndi Sinclair, a 50-year-old mother and divorcee...

You can file this scene under "All Action, No Talk." The action is with...